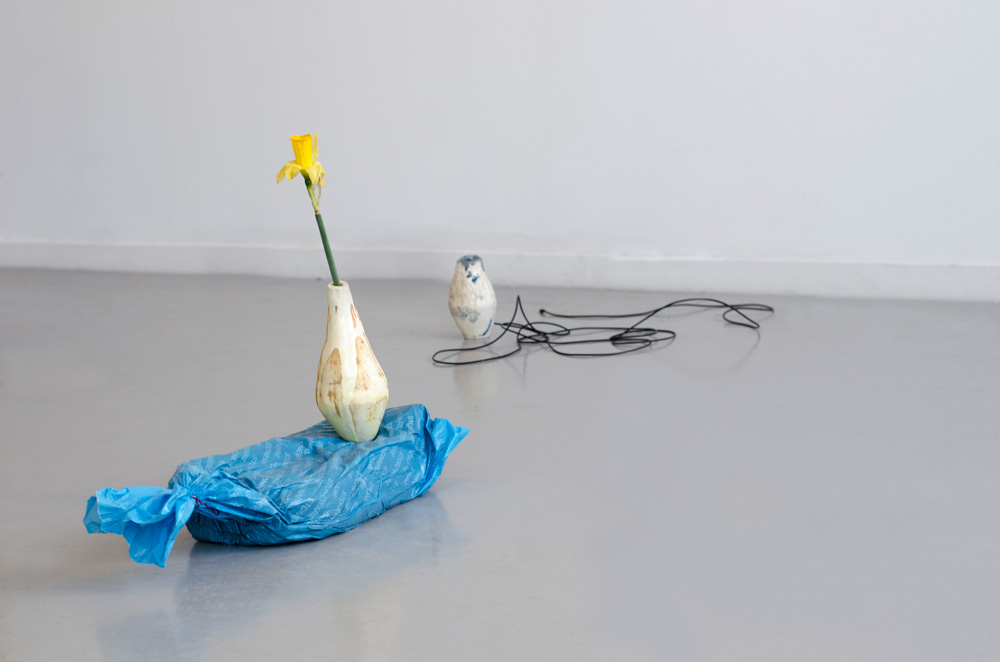 Those most stubborn of human creations – plastic, pottery and glass – are all made for holding.

Vessels are made, and they hold and keep until they are emptied. I have a lot of empty plant pots that have been abandoned after being outgrown, like seashells. While plants germinate, bloom and die, the plastic and ceramic that hold them hardly changes. Mould and beetles will metabolise the cellulose of the stem, leaves and roots, but ceramic endures as it’s molecular structure is closer to a fossil than a plant.

There are vessels which millennia later still hold the last grains, not-digested-yet, like the last meal in a bog man’s stomach. Some are stained with smoke or wine, carrying the residue of what was once useful, of could-be sustenance. There are vessels that hold the sounds we throw into them too. That already-gone moment of sound’s shape might yet echo when we put our ear to the rim. 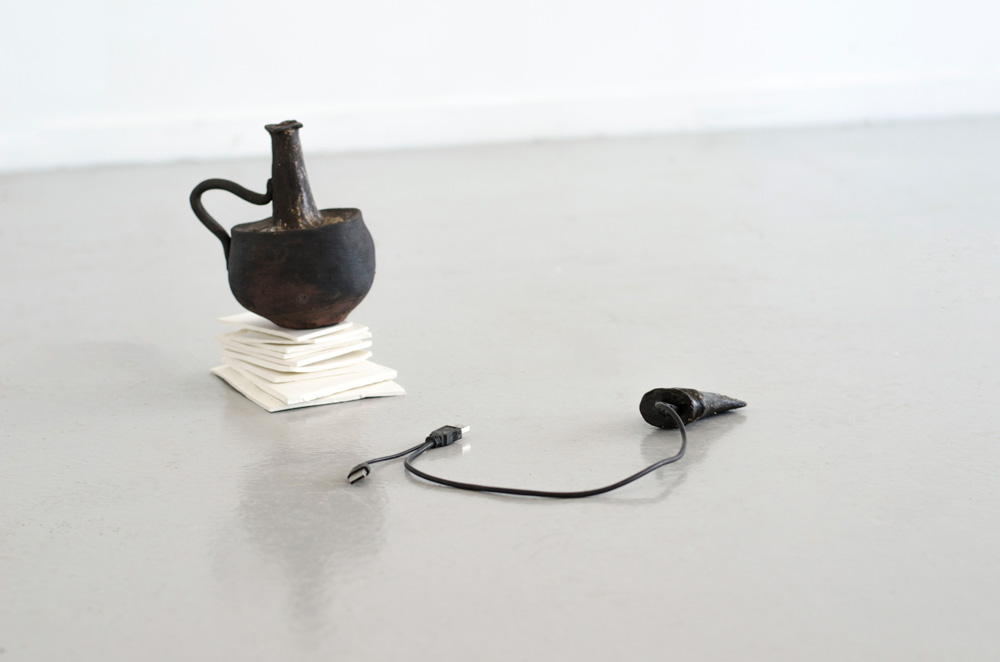 The men stand on a tiled floor, a floor that also paves Westminster Abbey, with a design that represents the macrocosm of the Early Renaissance, laid 300 years before Holbein painted it’s likeness on oak. Across the floor in the painting there’s a big brown and black splurge which looks pretty out of place. It’s a human skull, but you can only tell if you are in a room with the painting and walk right up to it, looking across the frame from the side. That’s why I’ve heard of it, why it’s famous. To me, the anamorphic skull has lost its potency as a representation of death, but the pleasure that I take from The Ambassadors is in the mortality it celebrates in the context that I view it in. An image on the screen, built of light, transversing space and time. A mortality that emerges through distortion: change rather than end. Things are neither born nor die, though they can turn away from each other and change states. Things haven’t changed so drastically that we cannot recognise The Ambassadors in the cultural and political figures around us now.

If the reader wisely considers all that is laid down, he will find here the end of the primum mobile; a hedge [lives for] three years, add dogs and horses and men, stags and ravens, eagles, enormous whales, the world: each one following triples the years of the one before. The spherical globe here shows the archetypal macrocosm.

Until scientists agreed that the earth revolves around the sun, the primum mobile (or first moved) was understood to be everything that moves around the stationary globe: the sky, stars, planets, the sun and the moon. An inscription claims that Abbey’s floor will last until the end of the primum mobile, the end of the universe. The date of the Apocalypse is calculated by the lifespans of animals and tripled-- 19,683 years after the inscription was laid, in 1298 CE. I have to say I find this a little unrealistic. After all, before the last restoration in 2010, it wasn’t looking so good. Grime had turned the rich coloured glass and marble muddy, after 500 years of footsteps and a further century under carpet. It takes a lot of effort to halt the onslaught of time, or rather, the onslaught of deterioration. Those monuments and figures that persist do so by the hands of people in the present. 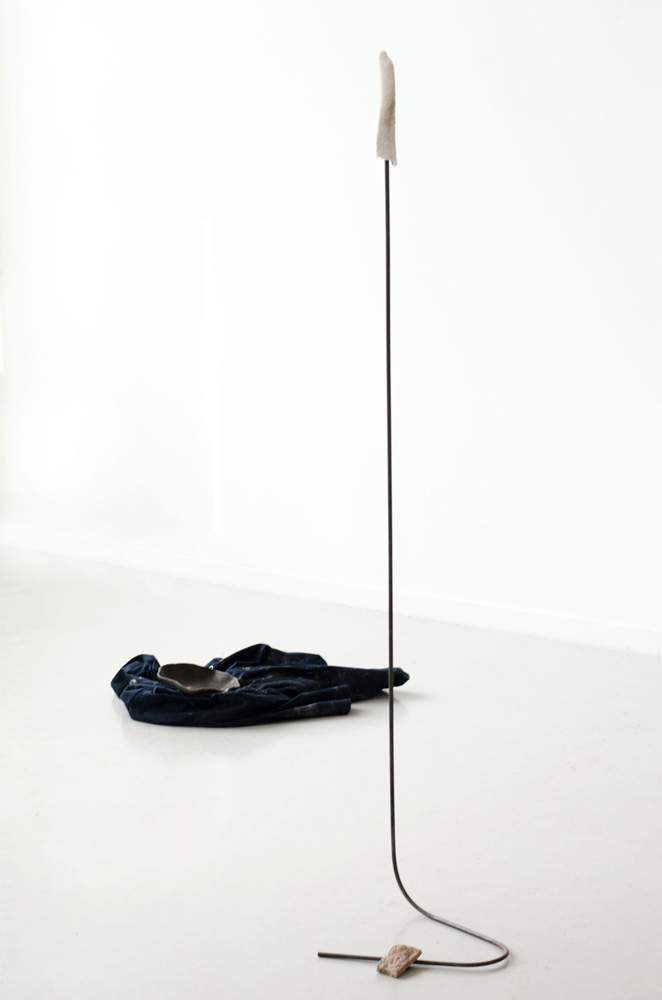 The weight of my body rises to meet me uneasily as the soft shape of a thing presses, then crumbles under my right sole. It crushes the way a biscuit might disintegrate underfoot, but somehow with a squeak, the clay turns to dust.

I turn around to inspect my misplacement and tread soft grey across the floor. It leaves a matte print of my pad, and as I crouch down, using my hands to gather it up, small particles scatter and settle in the spaces between the boards and compress against the sides of my palms. Little channels of powder.

I need to fix the hoover.

I take off my socks, rolling them up with the clay inside, and chuck them in the washing basket. I pad through to the kitchen to find and soak a cloth to wipe up what I can. A dustpan and brush will only move the stuff around and get it in the air. A damp cloth works. 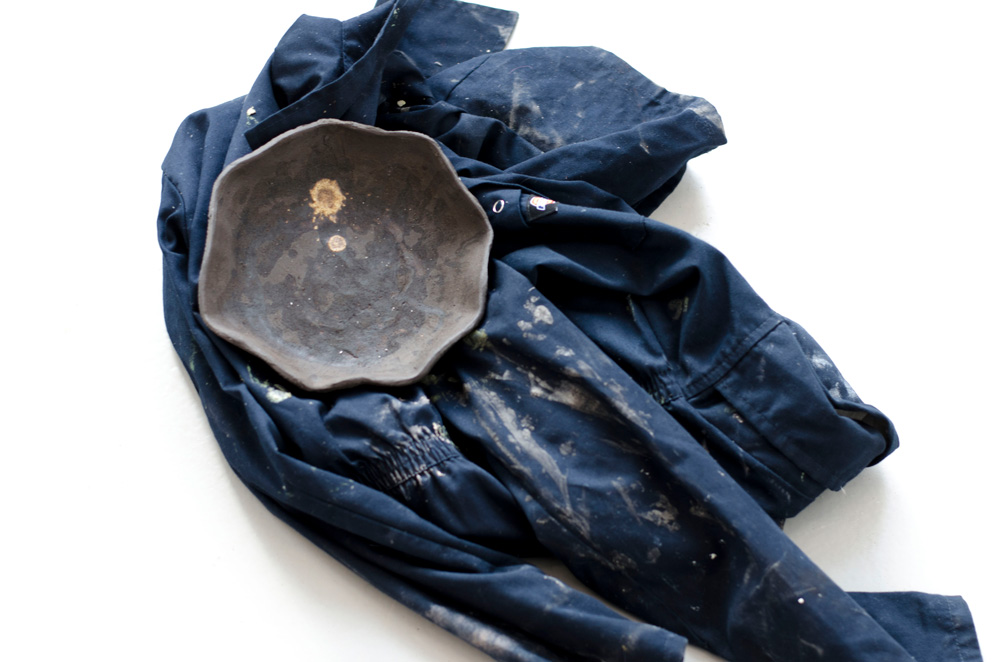